An anthological collection of articles explains and documents the vocation to communication of the Salesian Don Giuseppe Costa, journalist, originally from Gela, head of the school publishing house SEI and religious LDC, for several years director of the LEV – Libreria Editrice Vaticana.

Published by Nemapress edizioni, the voluminous volume of about 300 pages “Wandering between chronicles and facts – Forty years of journalism”, documents the Salesian charism, presenting articles on “Saint John Bosco, saint of young people”, published in 1988. by “Il Popolo” and by the Osservatore Romano, recalling Easter 1934, when at the end of the Year St. Don Bosco was declared a saint and his statue dominates above near the artistic bronze depicting St. Peter in the chair of the great Roman basilica. .

In the articles that also refer to the presentation of books on the Founder of the Salesians, the function of oratory, archetype and irradiation of the “pedagogical laboratory” that enshrines the preventive method and the educational art of Don Bosco is extolled. .
In several articles, published in Avvenire in 1991 and in L’Osservatore Romano in the years 2000-2002, Don Giuseppe Costa presents the many faces of Christopher Columbus, the company of the discovery of America and the events that have marked history and especially the September 11, 2001 attack and the collapse of the Twin Towers.

In an article published in “La Sicilia” on March 27, 1992, Don Costa, interviewing Furio Colombo, president of the Italian Cultural Institute in New York, addresses the issue of Italian culture for America, a real “laboratory “open to multiculturalism, highlighting Italian publishers who publish texts and works of art, while the dissemination of American culture penetrates the different sectors of cinema, literature and scientific research.

In the anthology, which becomes almost a biography, the Author collects articles written during missions, church conferences, journalism and publishing, trips to Madagascar, India, Egypt, Israel, Poland and Germany, the focus is always on the social and cultural issues, publishing houses, libraries, such as a visit to the 16th-century Blutensburg Castle which houses the largest library of youth literature.

Also original is the article “The weekend who invented it” (L’Osservatore Romano May 2001) which describes the long queues of cars on May 1, the maxi eddies of each weekend, which do not have the bucolic flavor and romantic. of the trip out of town, but “being in line for hours and hours smells of social alienation rather than free choice.”

The reduction of working time, the weekly rest, the short week at school, and then again the anticipation of the Sunday Mass on Saturday evening has favored the change of style in the social organization, today essentially oriented. to consumption.
As a Salesian, attentive to young people, in the anthological collection Fr. Costa has included articles on the associations of the youth movements of different Christian Democratic parties, socialist, communist, republican parties, and then again on Communion and Liberation. Articles published in the Salesian magazine “New Dimensions” and the newspaper “Avvenire” deal with issues related to youth ministry and the title of an article seems original: “The Gospel puts on jeans” commenting on the document for education of young people. US Episcopal Conference on Youth Pastoral Care in America.
The Author pays special attention to the Youth Days and the article on page 192 is also very current: “But can peace be taught in school?” (Il Popolo January 2, 1986)

Regarding the Proceedings of the seminar “Education for Peace”, the need arises to respond to the challenges of history, identified by some in the proposal of the era of peace in school, as a pedagogical stimulus for consider it in the complexity of the problem. Quoting the pedagogue Pietro Gianola states that “the problem is at the heart of international diplomacy, political debate, moral reflection, daily discourse, social communication, better youth awareness, anthropological research, individual and group therapy , of the spiritual discourse of the churches ”.

The political will is nourished by the moral will for peace, and the different dimensions, though many, require educational intervention and cannot be disconnected, “peace, in fact, must be individual, moral, cultural, social, political and religious “,
School education for peace involves a global project of global educability of man and his primacy and youth volunteering is a sign of hope.
Bringing to light these reflections, small pearls of current throbbing of the archives of the newspaper archives, is a necessary service of authentic social communication and Don Giuseppe Costa completes the precious anthology of articles with a collection on the Mediterranean, on Sicily, narrating “. The golden centuries of the ancient Greek colony ”, the art exhibitions at the Ursino Castle, the Diocesan Museum of Catania, the Museum of Caltanissetta and Gela and also bringing to the attention of the Roman Observatory the magnificent Marian shrines of the island .

The last section of the volume is devoted to journalism, welcoming the Faculty of “Communication Sciences” which not only constitutes “a piece of the kaleidoscopic world of academia”, but also tends to establish a tradition in the social fabric. , which through training, perpetuates the wealth of knowledge needed to support a series of social functions aimed at reproducing over time ”.

As we read on the back cover, “To the many young people who attend journalism courses in search of a job of the future, increasingly difficult and rare, it must be said that the journalist is not the man of entertainment and image, but that of a professional to build with good studies and so much practice ”.

In fact, communication is nourished by knowledge and only following the path of quality, social responsibility, objectivity, awareness and truth, journalism grows in professionalism and art, as can be seen from the Epistemological Statute of Communication Sciences. 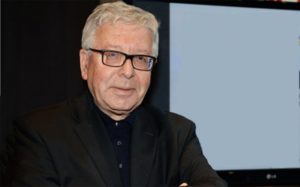 In the photo above: Fr. Giuseppe Costa, Salesian religious. In November 2020, the Rector Major of the Salesians, Fr. Ángel Fernández Artime, called him to collaborate in his Secretariat, also with the task of being co-spokesman of the Congregation.

Don Giuseppe Costa is already known in the field of Communication for his numerous and appreciated services to the Church and the Congregation.

He was a professor at the Pontifical Salesian University. He also taught Luiss and Lumsa. In the United States, at Marquette University in Milwaukee, he earned a two-year master’s degree in Journalism.

For ten years he was Director of the LEV – Vatican Publishing House.

He is the author of publications with special attention to religious publishing and the reality of young people.

He has recently participated in the 28th General Chapter of the Congregation.