Rebuilding the parental courage of young people We are the second country in the world to have older people, we live longer and even better, but there is no generational change with an ever lower fertility rate until it reaches (and not from today) below of the average of 1.5 children per woman. In this situation we enter a demographic trap which jeopardizes current levels of well-being and well-being. (Image by Dim Hou from Pixabay)

The future of our country depends on young people and we must first get to know them and talk to them to understand how to guide policies, services and projects. We jointly observe the data from two qualified sources that help us to update the coordinates with which to read the changing phenomena.

THE RESEARCH OF THE TONIOLO INSTITUTE
Every year the Giuseppe Toniolo Institute promotes a large quantitative survey on young Italians, the data of which flow in the Report on Youth, on issues of work, school, family, participation, values, social networks. The 2022 edition has just been published and indicates some very interesting data. (The condition of youth in Italy. Youth Report 2022).

WHO ARE WE: 9 thousand young Italians
AGE: between 18 and 34 years
CIVIL STATUS: 67% i would like to start a family with children at 30 years old PROFESSION: student, worker, unemployed,
ADDRESS NEET: resident on social media
PARTICULAR SIGNS: we talk about ourselves without talking to each other.

SCHOOL EFFECT
Thanks to school, young people recognize that they are better able to relate to others, to adapt to change, to develop autonomy in achieving goals; however, according to their experience and perception, the school does not favor the development of leadershipthe ability to conflict management, positive thinking. So there is a lot of work to be done.

SOCIAL
The question “How much time do you spend a day on Facebook?” reveals this on average they spend 1 hour and 15 minutes every day. However, with a very wide distribution between those who never do it and those who “live there”. In detail they answered: never 8%, less than one hour 48%, 1 to 3 hours 31% and more than 3 hours 12%. There are no substantial differences by occupational profile: those who study and those who work have the same percentages, with the exception of the share of more than 3 hours a day of NEETs which is 17%, compared to 10% for the other two categories. So you have to meet them on social media but not only.

LEAVE THE HOUSE
For young people, the transition to adulthood means parental autonomy and the formation of a family. When asked “How old is it to leave your father’s house?”, They replied: between 20 and 25 years 41%, between 25 and 29 years 39%, only 7% over the age of 30, in fact 13% even before the age of 20. They think so, with no difference between men and women. So you have to give them a chance to have a home of their own, very soon.

WORK MOBILITY
When asked “Are you willing to go abroad to work?”, Young Italians, French, Germans, English and Spaniards responded as follows:

Young Italians have the greatest propensity for job mobility among their peers in major European countries, in particular in foreign countries with a share almost double that of the Germans. We have continued to be a people with an emigrant vocation, although we forget it when others emigrate to us. The data is not an alarm bell, but an ongoing fire bell. The long-running bloody exodus impoverishes our country of the most important people to build the future. And if the trend is not reversed, the high predisposition to leave will become a fate of decay and misery, with a vicious circle in which even “going back” becomes impossible. 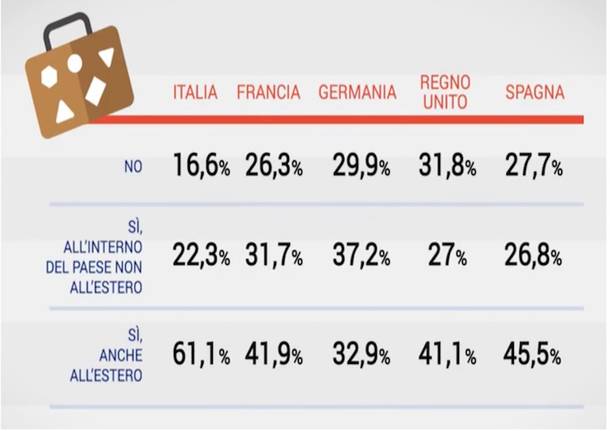 IPSOS RESEARCH
Disappointment, anger, disillusionment and silent indignation these are the main emotions experienced by the Millennials and Generation Z of our country, linked to the need for a policy that dreams again, that talks about the big issues, that nurtures the idea of ​​a different and better future. 42% do not know who to vote for, 13% have never gone to the polls since the age of majority and 7% cancel voting. 86% he is angry at social differences; 78% believe that parties and politicians are distant and disinterested in young people; 78% say we live in a time of great injustice and exploitation; 72% are concerned about the excess power of multinationals; 71% believe that all politicians are dishonest; 58% say they don’t trust anyone; 55% see the banks as enemies of the people; 79% accuse Italian entrepreneurs of being interested only in profits and little in people; 78% believe that our economic model is unfair, modeled to benefit only the rich and powerful; 82% assume, for the coming years, the growth of the clash between the people and the elite; 31% believe that radical and revolutionary movements are necessary to change the status quo. Source: IPSOS. 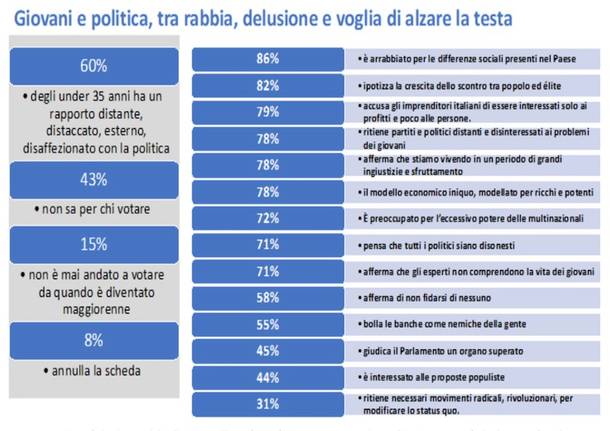 The expectations of young people indicate the areas of intervention on which to direct dialogue and action. 96% want greater commitment and sacrifice for protect the environment and combating climate change; 85% appreciate politicians and the movements they can build proposals from below and shared; 75% of young people want to hear about it solidaritywhile 67% condemnation any discriminatory act or attitude or racist; for 66% it’s time to be back more pro-European. The most notable social fractures, those that should be at the center of the program of an ideal party, are: the less precarious workhonesty, the environment and the generational change in politics.

THE THOUGHT OF THE EXPERTS
In 2070, Italians will be 47 million, 12 less than the current figure. Neither will migratory movements be able to bridge this gap. The pandemic has had a negative effect on births. Nationally, the average number of children in five years went from 1.37 to 1.27. What does Italy need? Employment and social inclusion, immigration, political courage, demographics, social security and the country’s economic balance are challenges on which the voice of experts is clear.

Alessandro Rosina, scientific coordinator of the Youth Report of the Toniolo Institute, and full professor of Demography at the Catholic University, illustrates precisely the dynamics underway and the possible strategies to deal with them. “The Western world is entering a new phase of its own the weakening of the working age population. Some countries such as Sweden and Germany have been able to react, but Italy has not managed these imbalances. On the one hand, immigration is an important factor in responding to demographic imbalances, on the other hand we cannot think of attracting immigrants without economic development and labor and social integration. In addition, both economic development and integration remain weak if it does not also improve the employment of young people and women. To reverse the course it is necessary address the housing problem considering how much young people earn in their first job. Interrelated with this is the question of transportation and redevelopment of the neighborhood which must have high requirements in terms of environmental, technological and energy efficiency. “All the factors that put young people, new families, in a position to think about the future in a more optimistic way and, therefore, also have a reproductive perspective.”

In Italy there are 27 places in nursery schools for every 100 children between 0 and 2 years old and the average age of birth of mothers is now 32 years. Only rent weighs 22% on the average income of young people in the semi-central area (The Sun24Hours given). So first you need to address the issue of services, starting with childrenthat it is necessary to extend and not to reduce, with attention to the flexibility, the costs, the waiting lists.

Yuval Noah Harari outlined the field of hospitality and the reception of migrants as the testing ground for the future of European identity: “While Europe was built on the assumption of overcoming cultural differences between Germany and France. “Italy, on the other hand, could collapse due to its inability to manage cultural differences between Europeans and migrants.” Immigrants are younger and therefore have more childrenthey do the work that Italians don’t want to do e they will pay us pensions. Immigration to be part of the solution requires overcoming the very low integration experienced so far: they earn on average 38% less than Italian workers, live thanks to illegal work and early school leaving is very high.

There is huge potential for investing working women and child education. Up to the age of 30, the female employment rate in Italy is similar to that in France and Sweden. But when women are absent, perhaps to have a child, they no longer return or if they return they find precarious jobs. The pandemic has exacerbated inequalities and now more than ever a family-centered political plan is needed to ensure women have the same job opportunities as men and that the boys also take care of their children. As for children, the school needs to invest more training of quality technicians and new technologies, not replacing them but integrating them with the humanities and linguistics disciplines.

SYNTHESIS
To have children it is essential to believe in a positive future. Uncertainty about the future and the objective conditions of the present, combined with the lack of public policies, are elements that condition the choice of young people to start a family and stop working in our country. 2021 was the year of planning the new phase of the country’s development following the unprecedented and unexpected impact of the pandemic. The Italian government has developed the PNRR (National Recovery and Resilience Plan) which contains ambitious projects, funded mainly with Next Generation Eu resources. Therefore, 2022 marks the beginning of a new stage. To lay a solid foundation for the future, Italy must put it at the center the improvement of the human capital of the new generationsand, an increasingly scarce asset in which to invest systemic solutions to demographic decline with a vision of sinclusive and sustainable development on the axes of digital and green transition. We need a real policy of support for the family and a new model of reception and integration of immigrants within a global plan that guarantees the long-term social stability of the country.

“The challenges are complex and must be faced by looking to the horizon of sustainable development so that today’s limits do not become the reality of tomorrow.”, Marcella Mallen.