Spider-Man, the most complete hero ever created: responsibility, honor, drama, tragedy, everyday life and a bit of irony.

Kennedy had been in the White House for a year, but abroad the wall was being erected.

It is in this historical period, early 60 ‘, that the modern heroes of Marvel Comics are born: Fantastic 4, X-Men, Iron Man, Thor, Hulk, but one in particular is destined to change the history of the comic: Spider-Man . .

Spider-Man, Peter Benjamin Parker’s alter ego is a fictional comic book character created by writer Stan Lee and artist Steve Ditko in 1962 and first published by Marvel Comics in issue no. 15 of the Amazing Fantasy series.

With a short story that was so successful that he convinced the publisher to dedicate his own magazine the following year entitled The Amazing Spider-Man.

Spider-Man is one of the most popular and most successful superheroes in history.

The IGN website placed him in third place in the ranking of the hundred greatest heroes in the history of comics.

He is universally recognized as the most famous and profitable Marvel character in the history of publications.

But how was Spiderman born?

The birth of Spider-Man was one of the most peculiar.

It was 1962, the American publishing climate was in full resurrection, thanks to the Silver Age, and there was an air of innovation, change and a desire for the future.

Stan Lee, had recently created Fantastic 4, and they were a success. In the year 62 ‘, its then publisher, Martin Goodman, commissioned a new superhero.

“The first thing, when you create a hero, is his power, then the rest comes by itself.”

And just for fun, he decided to make the character a teenager, something totally unexpected at the time, as the teenagers could only be shoulders.

It gave him personal problems, insecurities, anxieties, worries, made him more human than ever.

“Okay, now I needed a name. Fly-Man? Mosquito Man? Here it is: Spider-Man. Spiderman, I found it so dramatic.”

The design of Spider-Man was initially commissioned from Jack Kirby, but his view of the character did not quite fit Stan’s idea, and so Steve Ditko drew it.

And Steve, he drew exactly what he was supposed to be Spider-Man, and so did Peter Parker – a 15-year-old boy, a little awkward, thin, with glasses. 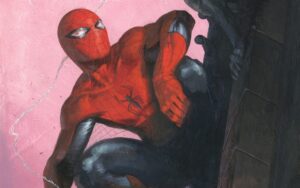 Spider-Man was ready to be introduced to the world.

Stan proposed everything to Goodman, who rejected him in every way. For no reason in the world would he have released such a “stupid” superhero, he said.

“Stan, do you have any idea who a hero is? Heroes aren’t teenagers, people hate spiders and then personal problems? They don’t have them!”

Stan Lee was uncomfortable with the soggy pitch as he couldn’t move the ball around with his usual grace.

Amazing Fantasy was a dying magazine, sales had dropped and it would die after issue 15, August 1962.

Stan put Spider-Man on the cover and explained his origins. He forgot that Spider-Man would die with that magazine. 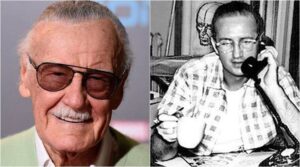 Spider-Man was an incomparable success among critics and audiences.

This led Goodman to commission Stan Lee to produce the character: The Amazing Spider-Man.

And from that day on, the adventures of Spider-Man did not stop populating the pages of Marvel comics, generating a whole world linked to the character: cartoons, toys, merchandising, and above all, blockbusters: Spider-Man , Spider-Man 2. and Spider-Man 3, by Sam Raimi starring Tobey Maguire.

The Amazing Spider-Man and The Amazing Spider-Man 2, by Marc Webb, starring Andrew Garfield, and the arrival of Tom Holland as a character in the Marvel Universe, with his appearances in real films and his trilogy: Spider-Man. : Homecoming, Far From Home and No Way Home, where the three Spider-Man came together for a great adventure together, giving fans the biggest surprise ever.

But what makes Spider-Man so important?

Spider-Man has no exceptional powers, not even gadgets or such a great suit.

There are much stronger heroes, with more dramatic stories, with more impressive apparatuses and powers, but none is like him.

The reason is so simple that many have never succeeded, not even many loyal followers.

The spider man is completely covered, he wears a mask, but that’s not all.

Anyone can be Spider-Man.

Peter Parker is so human, he has nothing to distinguish him from any other boy, girl, man or woman, Western or Asian.

Peter Parker is a studious high school boy, but with some problems with bullies, he finds it hard to be noticed by girls, has few friends, and experiences many difficulties: he can’t pay rent, he’s broken, he cares about his aunt, he has problems with his friends, with his girlfriend and many other difficulties.

And isn’t that what we all experience? Spider-Man could be anyone: man, woman, adult or child, because we all live in hardship, we have suffered injustices and we have overcome grief. 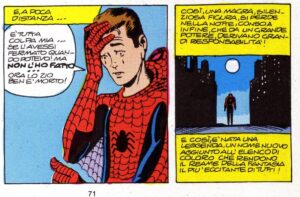 Yes, mourning is one of the main themes of Spider-Man’s birth.

Peter lived his life without his parents, with few memories.

He was raised by his uncles, Ben and May, who taught him the values ​​of strength, respect, mercy, and most of all, responsibility.

This is the sentence that marked Peter all his life, a sentence handed down by Ben shortly before his death, at the hands of a criminal whom Peter decided not to stop.

The guilt over Ben’s death, along with his teachings, forged his heart and made him … Spiderman.

The spider man in his life will always face responsibility, like all of us.

In addition, Spider-Man gave voice to all young Americans and non-Americans, who had no voice. Spider-Man is the hero of ordinary people, the friendly hero of the neighborhood.

Spider-Man represented a generation of young people who rebelled, made themselves heard and would soon call out to the world.

That’s why we’re all, Spider-Man.