Hundreds have wanted to know up close the stories, witnesses, images and emotions told by the international directors who have arrived in Taranto. Splits of life of those who defend women’s rights, between extreme difficulties and the desire to always show “The gaze of the tiger.” The Oasi dei Battendieri, on the shores of the Mar Piccolo, was filled during all the evenings with talks, film screenings and debates that enriched the Taranto Film Festival.

The 2021 edition, recovered in these summer days of 2022 after the postponement by Covid, focused on the cinema made by the women of Islam. Four evenings with screenings of seven films and meeting with the authors. Special guests were directors Iante Roach, Masooma Ibrahimi and Sahraa Karimi, who spoke about the work of women involved in the social and cultural world. Artistic direction of director Mimmo Mongelli, editor of Palestinian actor Balsam Asfur.

In addition to the films, also the reading “Sguardi” by Luisa Campatelli, with Tiziana Risolo directed by Alfredo Traversa: an immersive moment of great emotional participation. And then the talks with the directors and associations Alzaia and Babele, two realities that deal with the support of women victims of violence and the protection of migrants in the fight against discrimination. During the talks also the messages of the parliamentarians of Taranto Alessandra Ermellino and Rosalba De Giorgi and the president of the regional council of Apulia Loredana Capone who showed closeness to these issues.

BBC Italian-Australian documentary living between Iran and Lebanon, Iante Roach said in his “Five Uninterrupted Cameras,” a report on five Afghan filmmakers, shot shortly before the fall of Kabul: “I thank Taranto for giving visibility to these stories about women forced to flee their country.” It’s important to talk about these issues, especially to the general public, and we did it in a splendid place in this wonderful city. “

For her first trip to Italy she chose Taranto and said she was excited. Masooma Ibrahimi, an Afghan-born director of an Afghan family, with “Kabul Girls” brought the story of four girls living in the capital of Afghanistan: “No one chooses where to be born, but we can decide what to do in life. And because of their nationality or gender, many do not have that possibility. Because of my origins, I was harassed, but these difficulties gave me the strength to do this job. 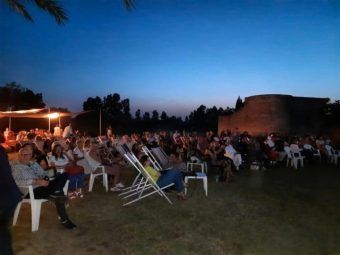 The audience attended the screening of “Hava, Maryam, Ayesha”, a film chosen by Afghanistan as an Oscar nominee and signed by Sahraa Karimi: “Talking about these difficult topics to the public is the most effective way to keep your attention always high. Combining tourism, culture and awareness on these issues is winning and I continue to do so in all parts of the world.

“We wanted to give a testimonial contribution so as not to forget the events that have ravaged the Islamic countries” underlines the artistic director Mimmo Mongelli “The condition of women in these fields is extremely precarious and we stand by those who with strength and talent continue to be a woman dedicated to cinema and society. We continue with the next edition and continue the cultural mission of the Taranto Film Festival, born in 2016 by the will of the Puglia Region and which is now part of the network of Cinefestival of the Apulia Film Commission. The editor of the edition Asfur balm comments “Film work is the tip of the iceberg, what we don’t see is the personal experience of these women. With this Festival we wanted to bring the stories of these women and their stories to Taranto. It was a really deep experience, made in a beautiful city, to be explored, to be looked at with other eyes.

The Taranto Film Festival, organized by the Levante International Film Festival-Taranto Film Festival, is an initiative of the Apulia Film Commission and the Puglia Region – Department of Culture and Tourism, based on the budget and the autonomous resources of the AFC Foundation. Regional POC 2007/2013 and the extraordinary plan “We maintain culture in Puglia 2021”, produced as part of the intervention Apulia Cinefestival Network 2021/22. Partners: Municipality of Taranto, Province of Taranto, University of Bari “Aldo Moro”, Academy of Fine Arts of Bari, Rai Puglia, association Alzaia Onlus, APS Babele.