First we put security. Three finalist videos made by the students

The institute “Carducci-Volta-Pacinotti “ di Piombino (LI) is the winner: he will receive full funding for 10 AM driving licenses for deserving students. The second place is the Institute “Della Corte-Vanvitelli“From Cava dei Tirreni (SA) which will be entitled to the financing of 5 licenses for students

The project “First we put security“On the prevention of traffic accidents in Italian schools, presented by the Vittorio Veneto Salvemini Institute of Latina and promoted by the Ministry of Education of the MIUR, with the participation of schools from all over Italy.

The students made a short film illustrating the drama of a traffic accident caused by the use of smartphones while driving. The video continues with the representation of an alien reality: three extraterrestrials from the distant planet Osiris comment that their fellow citizens, although similar to terrestrials, have long understood that “Life is too important to live at risk; and that humans still have a long way to go. “. The Institute stood out for its creativity and execution, characterized by multiple shooting techniques. As a reward, funding 10 free AM driver’s licenses for the most deserving students. Here is the link to the video

The second place is the Institute “Della Corte-Vanvitelli” of Cava dei Tirreni (SA), which will be entitled to funding 5 free AM driving licenses for the most deserving students. His video, entirely graphic animation, focuses on the main causes of traffic accidents and non-compliance with safety regulations. Here is the link to the video

Honorable mention to the students of the Institute “Vittorio Veneto Salvemini”From Latina for her efforts. Here is the link to the video

The project, carried out jointly with the Local Police and the Department of Prevention, Traffic Police, Association of Road Victims, involved schools distributed throughout Italy and dozens of students from 5 Italian regions, with the aim of create a culture of security. through school education, become safer and more aware road users and protect their health and that of others. 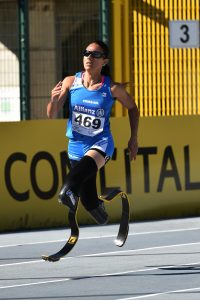 The support of the Paralympic athlete Giusy Versace it was crucial to the success of the initiative. Here is the video he recorded

“This is an issue that is very close to my heart because, after the traffic accident I had, I became even more aware of the need to form a culture of respect and prudence through road safety education, especially between the youth. said Giusy Versace, Paralympic athlete. – For this reason, I am pleased to be able to support this initiative and I am grateful to all those who contribute; together we can make a difference ”.

In the jury, professionals from the specific fields of communication and video: President of the Jury Paolo BrambillaCouncilor of the Order of Journalists of Lombardy; Francesca Lovatelli Caetanijournalist, writer and communication expert; Luca CarcanoCEO of Recarcano Srl, expert in video production, editing, directing and broadcasting for Mediaset, Infinity and Sky; Paolo Mazzantijournalist and editorial director of the AskaNews National Press Agency; Camilla Giannelliowner of the Web Art Direction Camileonte studio.

The word to the directors

“We are proud to have participated as an Institute in this important project; I am especially thankful to my partner Marina Rossi for getting me involved in this experience. The fact that students are the real protagonists of the project is certainly an added value because it shows how the school is increasingly trying to talk to young people with the use of means known to them and managed according to their logic“, he claims Sabrina Zottola, dean of the Institute “Carducci-Volta-Pacinotti” of Piombino (LI).

“Protecting one’s own safety and that of others is an indispensable value for everyone – he claims Marina Rossi, dean of the Vittorio Veneto Salvemini Institute – However, for roads to be safe places, it is not enough to repress wrong behavior, punishing those who break the law: a culture of road safety must be created, starting from the bottom, with school education. and finding effective methods of communication that can only be identified among equals. “

“We give priority to security”

School training project on road safety presented by the Vittorio Veneto Salvemini Institute of Latina (LT) and promoted by the Ministry of Education. The initiative is carried out in collaboration with the Local Police and the Department of Prevention and with the support and testimony of Paralympic athlete Giusy Versace; the speakers are Dr. Pietro Gammardella and Dr. Silvia Iacovacci. The schools involved are: IIS “Vittorio Veneto Salvemini” (LT), IIS “Della Corte-Vanvitelli” Cava dei Tirreni (SA), IIS “G. Filangieri” Cava dei Tirreni (SA), IIS “A. Volta” Nicosia EN), CPIA Morbegno (SO), IIS “Carducci-Volta-Pacinotti” Piombino (LI) Students from each school will have to produce a 2-minute short film on road safety which will then be evaluated by an external jury; has at stake 15 fully funded licenses, 10 for the first ranked class and 5 for the second.