During the refurbishment of the old municipal villa of Monte Sant’Angelo, some 16th-century arches were found on the lower floors of the old Capuchin convent. 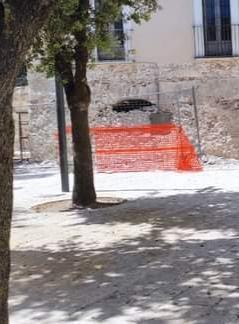 Several citizens, town halls, political forces and associations have expressed their willingness to recover the discovered archaeological assets, but a gloomy silence has drowned out their expectations. 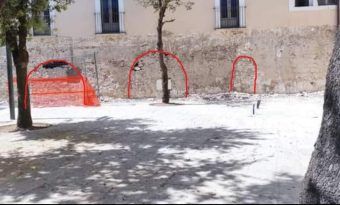 With timely action, the arches were covered with mortar and none of the authorities in charge of safeguarding the architectural heritage informed the city of the reckless gesture.

Dissatisfaction spreads among the people and it is easy to meet those who are surprised by the silence of the School and the Institutions. However, the toponymy of the city informs and explains the reasons and the meaning given to the Piazza della Beneficienza, the place where the ancient Capuchin convent stands out.

What happens in the daily life of the city from both UNESCO sites is unlikely. The discovery of the arches of the old Capuchin convent does not generate any curiosity, on the contrary it is popularized to diminish its historical value. The mayor writes that “these are small rooms that cannot be used inside the foundations built to raise the structure.” A statement that currently finds no historical confirmation, but that removes his desire to return to oblivion the arches discovered, not to deliver the past to the city.

The day-to-day life of the elderly is shrouded in silence, a cry of silence that is not appropriate for a candidate city for the capital of culture for the year 2025. But this is not just the archaeological history of the ‘antiquity. feudal city. , there is more.

Anyone who wants to know the artistic truths hidden in the womb of the city of the archangel Michael can observe the relational, political and electoral dynamics. After that, it becomes superfluous to rely on journalistic consultations to know the many resistances raised to the reappearance of the many treasures buried by the dust of past centuries.

Of course, to preserve the memory you need to know what it was, what it is and what it will be. But not everyone does: the local political-cultural class chooses the laziness of subjection and the forgetfulness of convenience.

Deafening is the silence of the former councilor for culture of the two Unesco venues, awarded with many votes.

The social history of the city is chatty and is explained by the power of shared silences. It is in this historical-administrative experience where the reason for the inconvenience of sharing, speaking and protecting the cultural good found is intertwined.

The oblivion of the history of the people of the city of the Archangel has been broken, broken. These days there are those who reread and tell the story of the ancient Capuchin convent.

For many, telling the story of the ancient Capuchin convent can be helpful. Not forgetting has become a way of appreciating the places, the square and the spaces lived by a past town with few rights, yesterday as today.

The city of Monte Sant’Angelo with the ancient Capuchin monastic complex has great merit: it has ensured, to many poor and many pilgrims, qualified assistance in the field of health and in the field of care for the elderly. needed. Under the uncovered arches, and communicating with the outbuildings of the convent, the Capuchin monks have guaranteed for centuries a meal a day to the destitute of the “Montaña de l’Àngel”. This tradition of caring for and caring for the sick, the poor and the elderly was mainly aimed at pilgrims going to the myceletic sanctuary, and then spread to the entire resident population, until creating, from 1561, a real hospital of the city, managed by the University of Monte Sant’Angelo, called “Hospetale di S. Angeli”.

Of his pious and sanitary work and of the Asylum of Mendicity, there are indications in the different reports of the pastoral visits of the Archbishop of Siponto, Cardinal Orsini, from whom many pious works, including the local hospital, received help and money. Thus, from the 19th century, and precisely from 1839, the hospital moved from the Convent of San Francesc to the Carmelites (former Carabiniers barracks, with the Carmine church attached); in 1858 and later in 1868, in the Convent of the Capuchins, with an adjoining church dedicated to St. Nicholas and a women’s orphanage. From that moment on, the City Council, in order to meet the different care needs of the Hospital dels Caputxins, had to sell the entire building of the Convent, including the land intended for the vegetable garden, which had been ceded to it. State, after the subversive feudal laws of 1806, as well as the other monastic ensembles of Benedictines, Franciscans, Carmelites and Celestines.

The solidarity purpose of this transfer was aimed at the use of a godly home of reception and assistance to the sick and elderly in need and in a state of loneliness. The socio-welfare purposes, desired by the community of Monte Sant’Angelo, have also aroused attention to beauty, to the architectural harmony of the convent with the nascent main street of the city. The current staircase to the hospital and the Capuchin church was built in 1880. The civil hospital “San Michele Arcangelo”, located in the convent of the Capuchins, had, until its extinction in 1957, a very important role in the social and health field. life of the city of the Archangel, both to be recognized as the only center of great renown in the field of medicine and care, especially in terms of surgery, thanks to prof. Filippo Ciociola and the cure of infectious diseases, such as malaria and tuberculosis, and the pious work of the Sisters of Charity and later of the Order of the Precious Blood. The hospital was closed in 1957, after suffering severe damage in the 1955 earthquake, to be moved in 1978 to the northern part of the old convent.

The long and almost secular history of the Adorers of the Blood of Christ in Monte Sant’Angelo (FG) is part of this scenario, crossed by a succession of solidarity activities of reception and assistance to people in need: the elderly, orphans , pregnant, ill; as well as school training and job initiation.

The rest is history today. The Municipality of Monte Sant’Angelo with its unpopular prefectural commissioners, neglecting the spirit of solidarity at the base of the “San Michele Rest House, located in the old Capuchin convent, in 2017 chose the path of the tender for the “management” of needs of the elderly and the poor.