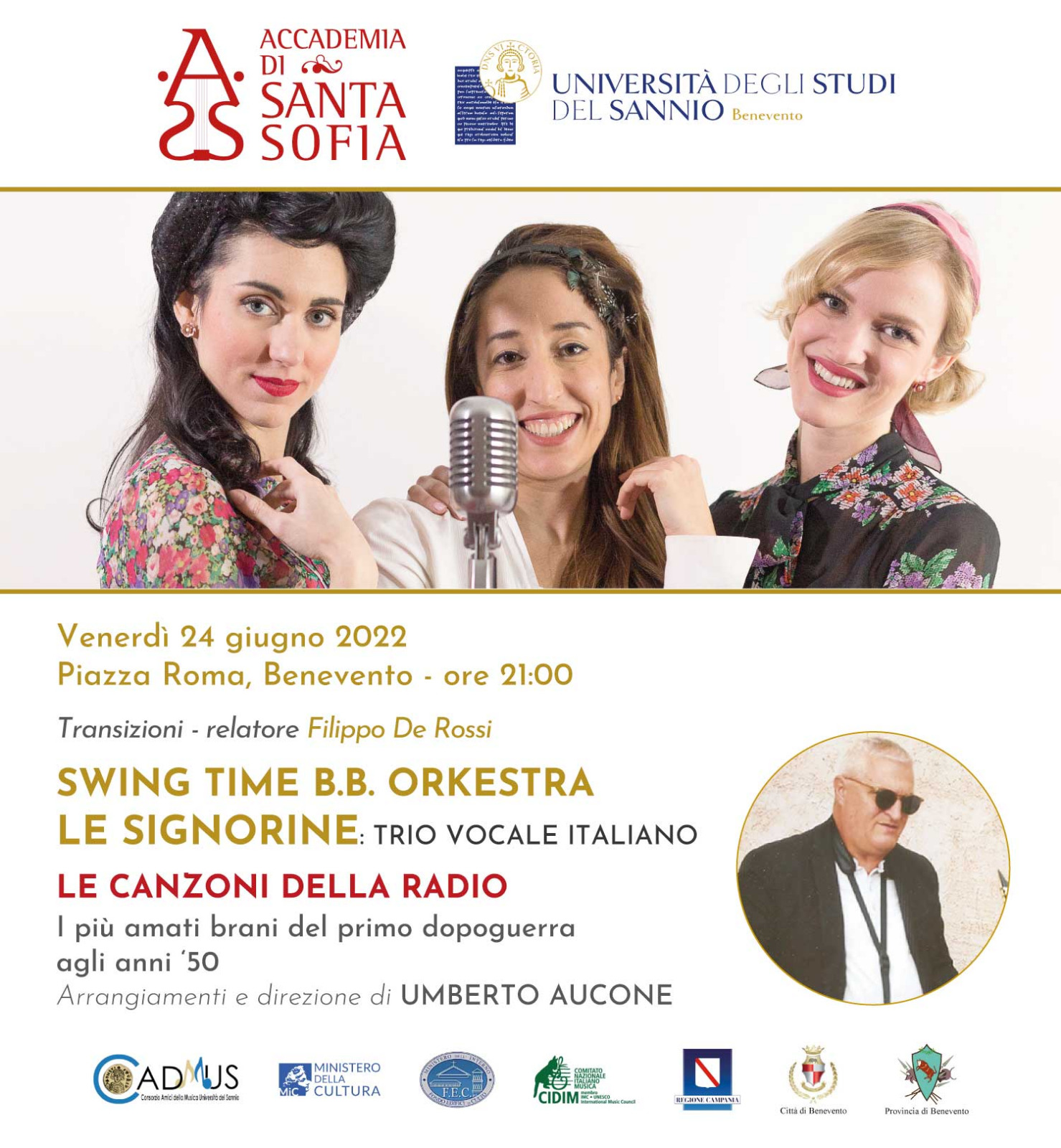 In Benevento with the Accademia di Santa Sofia it’s time for the Swing! On Friday 24 June at 9 pm in Piazza Roma in Benevento, the great Jazz returns with the concert “Radio Songs”. A stylish closing, for the last exciting appointment of the 2022 bill, proposed by the Accademia di Santa Sofia in collaboration with the University of Sannio, under the artistic direction of Filippo Zigante and Marcella
Partial and with the scientific advice of Marcello Rotili, Massimo Squillante and Aglaia McClintock.
Swing Time BBORkestra and Le Signorine – Trio Vocale Italiano, arranged and directed by Umberto Aucone, for the last evening of the season, will offer the Benevento public an effervescent immersion in the wonderful golden years of the Swing, with a delicious selection of the most beautiful and memorable compositions of the Swing. ‘900 that have never been written for a Big Band, by the sacred monsters of jazz, that have made the history of world music, from “In The Mood” and “Moonlight Serenade” by Glenn Miller, to Tribute to Duke Ellington, in Scotty Morris’ “Go Daddy.”
The program will then take us on a walk through the mythical and unforgettable Italian songs that were heard on the radio between the first postwar and the 50’s: Tulipan and Baciami piccina by Luigi Astore, Il penguin in love and Maramao because you died for Mario Tip, Pippo Doesn’t Know and A Midnight Kiss by Gorni Kramer, Carina by Corrado Lojacono, Gianni Ferrio’s Little Serenade, But Legs, Don’t Forget My Words and I Want to Live Like This by Giovanni D. ‘Anzi, In the Painted Blue of blue by Migliacci – Modugno, and finally the universal masterpiece, Somewhere over the rainbow by Harold Arlen,
achieved worldwide success by Judy Garland in 1939 in The Wizard of Oz.
An evening of great music under the stars, for a first unmissable summer, which will open, as always, an interesting scientific-popular thesis entitled Transitions by Filippo De Rossi.
The vocal trio Le Signorine is a project that was born in 2016 from the will of three young Tuscan girls, lifelong friends and united by the same passion for music. When they find themselves singing together after a long distance thanks to the musical studies of all three, they discover the pleasure of intertwining their voices singing in trio. The turning point comes when an arranger listens to them and decides to help them make their dream of becoming the queens of Italian retro-vintage music come true. Thus begins a process of collaboration
with a completely Italian repertoire, to rediscover the true sounds and give value to the timeless musical pearls of the magical 50s. The clothes, makeup and style are strictly vintage, to project the viewer directly into the atmosphere of the age.
Umberto Aucone, a well-known saxophonist and jazz arranger from Benevento, approaches music by studying clarinet and saxophone at the Cimarosa Conservatory in Avellino. He attended jazz harmony and improvisation courses at Duke University of Perugia (UMBRIA JAZZ) and participated, as Primo Sax Alto, in the closing concert with the Umbria Jazz Clinics Big-Band conducted by Paul Jeffrey. He attended the “Mister Jazz” seminar with Michael Brecker in Ravenna. He plays in different jazz and fusion ensembles, in section and how
soloist, in numerous festivals, theaters and specialized halls, in Italy and abroad. He formed the “Basin Street Sax Ensemble” with which he developed an intense concert activity in Italy, France (Paris, Cannes, Nice), America (New York International Festival) and Canada (Toronto and Montreal). He attends music specialization courses at the CPM in Siena with Klaus Lessman, Roberto Nannetti and Manhu Roche.
Very busy and active in the area, he was for seven years artistic director of the Sannio Jazz Festival, organizing concerts and seminars for the dissemination of Jazz music. In the 1997 edition, in collaboration with Gerardo Di Lella, Bruno Tommaso, Riccardo Fassi and Pietro Condorelli, he convened a competition for arrangers and composers, “Freedom of improvisation and writing”, much followed and appreciated also by the national specialized press (Jazz). music). He founded the Sannio International Big Band, now the BB Orchestra, of which he is arranger and conductor with whom he recorded the CD, “Swing Pop”, by
which have selected two songs, included in the compilation published by “Italiano Jazz Record” with national distribution.
He has performed and edited the horn section arrangements in various Nightaffair Productions productions. He plays as a soloist on the song “Jazzaffair Collective – When The Harmony Smiles” – Monte Carlo Nights produced by EMI Music and the RMC-Radio Monte Carlo Network. He has collaborated as a saxophonist in the productions of the “San Carlo” Theater in Naples, and as an arranger, with the Great Rhythmic Symphony Orchestra of Udmurtia (Russia). He has published the didactic text “Technique Method for Saxophone” and two compositions: the first, “FourTune” for saxophone quartet, inspired by the fascinating and interesting examples of rhythmic modernity of Skrjabin’s piano works; the second, “Saxaction,” a composition by saxophone and Big Band section. And then three Cycles of Popular Music, with arrangements for Rhythmic Symphony Orchestra performed by prestigious artists
orchestras: Italian pop music (16 volumes) and Popular music 1 and 2 (19 volumes).
Intense concert activity. As a soloist he collaborates with big names in Italian and international music and, as an arranger, with various orchestras in the music scene.