URBINO – “I hope I’ll fix it” – said the student of the teacher Marcello D’Orta in one of the themes of the book that has traveled the world (to the point of becoming a saying). An ingenious and ironic way to shed light – already in the 90’s – on the scourge of early school leaving. According to a 2020 Eurostat report, the percentage of students between the ages of 18 and 24 who drop out of school without finishing high school is 13.1%, most of whom are men, foreigners, residents of southern Italy . Stories like those of Abdo I RaedEgyptians who arrived in Italy by boat, who have now made their way as chefs, thanks to an institute in Urbino that taught them a trade.

Don Ezio, former rector of Trasanni, in 2017 dreamed of transforming the Marian Institute The Pelican in a training center for “difficult” children who wanted to drop out of school and risk getting lost along the way. The private professional institute is born Enaip Zavatta, an egalitarian private school with different directions: catering, electrical and commercial. “Our students are the ones who have fought with the public school,” says the referent Annarita Bonaventura – our goal is to get the children back on track, give them confidence and, above all, get them out of school with a job in hand and maybe a job contract ”.

The Enaip Zavatta Institute is funded by the ESF, the European Social Fund, and is the only one in the field that guarantees free vocational training, focused on practical experiences. Compared to public hotels or professional institutes, students here do 12 to 15 hours of lab work per week and can make up for lost school years by doing two years in one. At the end of the three-year period, they obtain a three-year degree and can choose whether to continue their studies for another year, return to public school to obtain a high school diploma or go to work.

From Egypt to Urbino with the dream of Italy: the stories of Abdo and Raed

Twenty years, modest eyes, few words and determination to sell. Abdo Awadalla, is an Egyptian boy who went through high school classrooms. He arrived in Italy with his brother, aboard a ship carrying 300 more refugees. “My family paid 25,000 guineas, about 2,000 euros, to get on that boat. We were 7 days without food or water before arriving in Lampedusa. I knew that trip was dangerous, but I wanted to take risks because living here has always been my dream. “

Abdo says he fled first to Rome, then to Arezzo and finally to Urbino, where he was received by the “La Villetta” community. At the age of 15 he hated school and started attending En.AIP high school without too many expectations but with one certainty: he wanted to work. During his third year internship he went to the restaurant La Stazione in Urbino and there something magical happened. “I was so comfortable at work that I enjoyed experimenting. At school I was passionate about cooking and when I had the opportunity to make pizza here in the restaurant I discovered that this was my world. I did a lot of testing with the Too much to improve. ”During his internship, he received his apprenticeship contract and after 3 years, Abdo is now the restaurant’s official pizzeria. , friends and work, but I would like to bring everything I learned here to my country ”. 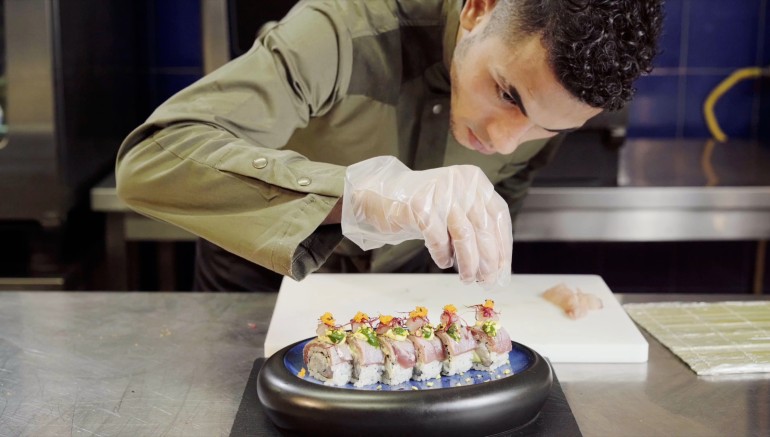 Raed Abdalla he was 15 in 2016 when he left his family in the village of El Menia, in southern Egypt, for Italy. “I was told I was cruising to a wonderful place. There were over 400 of us on the boat. During the voyage we lived surrounded by vomit and excrement. We were entitled to half a glass of water a day and a sandwich. Once rejected by Greece and Spain, after more than two weeks of travel, we arrived in Lampedusa ”.

Some compatriots had warned him that he would never obtain the documents in Sicily, so Raed first escaped to Rome and then to Urbino, a place he did not even know existed. “The teacher Emanuele Barzotti The Pelican Institute had convinced me to pursue at least an eighth-grade degree. In the meantime he had started catering. There I realized that cooking was my passion ”. Over the years, calls have come in from various restaurants, including the Sushiya and the Sushilab Sea of Fano in which he worked as a chef.

At the age of eighteen, Raed left the community and obtained a driver’s license. Today he lives in Fano, works as a consultant in the restaurant sector and manages new restaurant openings that are based on his experience to open premises, such as Crudogen in Silvi Marina d’Abruzzo. From chef to manager, the transition was short. Last year he won the competition with his school Combiguru challenge, a competition between all the hotel institutes in Italy. “When they said my name I felt a unique feeling, a mixture of joy and gratitude. Joy for my success and gratitude for the school that had welcomed me and made me feel “at home”. I won a 5,000 euro oven and gave it to them ”. Raed says he’s “in love with this country” and doesn’t feel like a stranger here. “If I had to go back, I would do everything again. One day I will take Italian citizenship and take my family to the Marches ”.