What is driving sports sponsorship in 2022? According to research presented by Nielsen Sport There are three main trends that are driving the evolution of the world of sports sponsorship, from the digital acceleration triggered by the pandemic crisis and the entry of new players into the sector.

The crypto / blockchain / NFT universe, the increasingly influential athletes and the great exploitation of women’s sports: these are the voices in which the research records the main changes, with a note that is the background of each one, that is to say, that in the center of all these changes are the fans who – quoting Nielsen herself – “are changing the game ”.

We first take stock of the sports sponsorship market

Before proceeding to examine the defined trends, it is good to remember the scope of the market we are talking about. According to the latest research conducted by Nielsen for ESA (European Sponsorship Association) the sports sponsorship market in 2021 grew by 17.8% compared to 2020a year in which – due to the Covid-19 pandemic – it had registered, on the other hand, a decrease of 23% compared to 2019.

In particular, this market last year it reached a value of 27.8 billion euros. Although in clear recovery from what is now defined as “Annus horribilis”, however, sports sponsorships are still below pre-pandemic levels (in 2019 they stood at a value of 30.7 billion euros).

Crypto is driving the growth of sports sponsorship

Looking at what has happened over the last two years, it is not surprising that the coincidence of interests has in fact linked two seemingly distant worlds. In the period 2020-2021, the sports market suffered numerous losses, mainly due to the limitations of events imposed by the health emergency.

On the other hand, in another segment, cryptocurrency companies, precisely in this period, began to express the need to raise awareness of a wider audience, mostly outside of financial transactions. For this reason, they were willing to invest.

A perfect astral design, we would say, that sees on the one hand a market in difficulty and looking for new “fuel” to resume its march, and on the other hand, that is willing to offer this fuel to achieve the goal of making properly known to the general public.

Here it is Sports sponsorship agreements in the Crypto / Blockchain / NFT sector grew by 1,100% worldwide in 2021 and, if the situation remains unchanged, Nielsen estimates that this market category alone will invest $ 5 billion in sponsorships in 2026 (778% more than in 2021).

Also in Italy, the Crypto / Blockchain / NFT sector is growing rapidly: compared to 2019, sponsorships signed by companies in this category increased by 425% in 2021, although volumes are still low.

To all this we must add that it is also growing the buying interest of fans in this market: its propensity to buy cryptocurrencies in the next 12 months, according to Nielsen, will grow by an average of 29% for fan tokens and 27% for NFT. 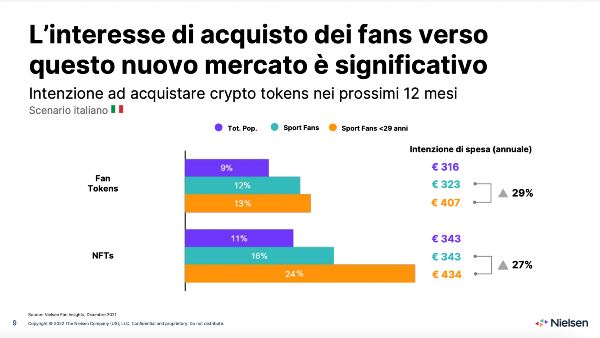 The reason for this growing interest from fans lies in the fact that these tools can allow them to connect with their favorite team / athlete and participate in some of the decision-making processes of their clubs, mainly social and digital activations. feeling more involved and at the same time allowing rights holders to activate new channels of dialogue with the fan base and, above all, with younger targets.

In this scenario, great opportunities will be offered by Metaversthe investigation still points.

The growing strength of athletes and sports influencers

Turning to the second trend identified by Nielsen as one of the driving forces behind the sports sponsorship market, research reveals that athletes have gone from being witnesses to being true influencerswith a greater ability to capture fans than other personalities.

26% of fans believe that following a professional athlete is a great way for brands to connect with their audience..

A curious but significant fact that emerges from the research is that smaller digital fan-based athletes increase investment efficiency. Even internationally, micro influencers are the most used by brands.

The big investors in this market are the companies in the sectors Active clothing (with Nike, Adidas, Asics, Diadora, Le Coq Sportif), Nutrition (with Nestlé Fitness, Matt, Tsunami Nutrition, 4+, Alphazer), Accessories (as Sector, Daniel Wellington) i Automotive (like Toyota, Stellantis) -the last two on par-, with more than 50 global brands that have signed agreements with Italian athletes and sports influencers. 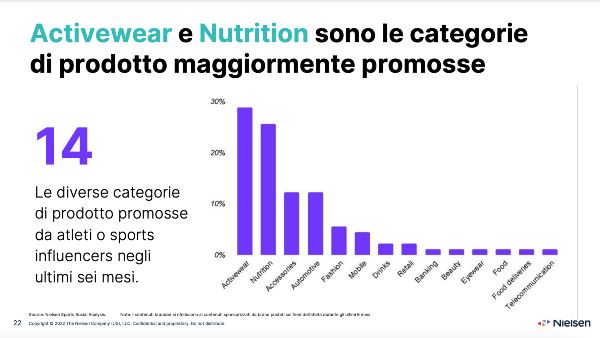 The growth of women’s sports generates new opportunities for sponsorship

Finally, women’s sport is always generating new opportunities for sponsorship and has lived a real exploitation in 2021 (+ 146%) thanks especially to the FIFA, Uefa and rugby world championships.

Growth in interest is also confirmed in Italy by digital channels, with a average growth of 65% of “base followers” of profiles dedicated to women’s soccer teams on Instagram in the last two years, and among the stations that broadcast the matches. 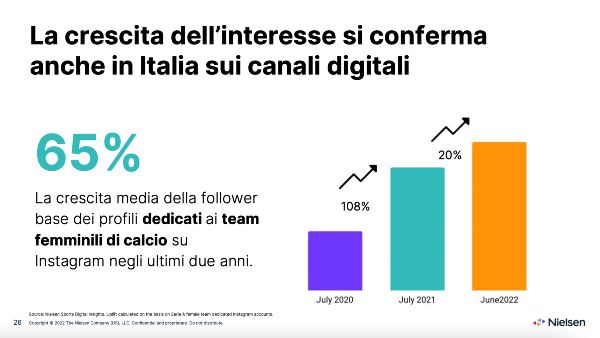 The marks were not long in coming either expanding existing partnerships with men’s teams to women’s teamsis implement dedicated communication strategiesfocusing mainly on issues such as inclusion, young sports communities and cutting-edge sports.