A 5-year-old girl was killed by her mother on the slopes of Mount Etna and a 15-year-old black boy was stabbed by a classmate in central Rome. Two terrible events that preceded a few hours the report to the Parliament of the Guarantor Authority for Children and Adolescents, or the exposition of the work done in favor of minors. Just yesterday morning, at the end of her first year in office, Dr. Carla Garlatti illustrated, in the chapter house of the Cloister of the Convent of Santa Maria sopra Minerva, with the presence of Paola Binetti, parliamentarian and child neuropsychiatrist. , representing Senate President Maria Elisabetta Alberti Casellati, the complex situation of children in Italy, which sees an exponential increase in families in poverty and the number of “unaccompanied minors”, not to mention the small victims of mental disorders. of increasingly widespread adults.

Dr. Garlatti stressed that her term began when the effects of the Covid-19 pandemic were still being experienced. He reported: “In this difficult time, children have been able to demonstrate, reshape and reshape their lives, demonstrating a capacity and intelligence that we often underestimate. One of the studies we did this year was that children were disoriented by the fragility of adults, in which they could not find safe reference bridges. “

He then pointed out how useful the Internet was to children during confinement. “If on the one hand we cannot think of ignoring the network, because the network is a source of learning, of knowledge, of sociality; we must not forget that the network is also a source of dangers, traps. “This year the Authority’s commitment has been especially focused on these aspects in order to make this vehicle as safe as possible.

The pandemic has affected the fundamental rights of children and young people: to be protected, to education and instruction, to play and free time and to health. To this precarious situation were added structural criticisms such as the condition of poverty of many families: at the end of 2021 there were 1 million 384 thousand children in absolute poverty, almost 3% more than in 2019.

The Guarantor Authority participated in the elaboration of the PNR, the Childhood Plan and the Italian Action Plan on child protection for vulnerable people. Special attention was paid to nursery schools, school canteens, schools, educational poverty, equal opportunities and the participation of minors.

Garlatti explained that a three-year scientific study had been launched, together with the Higher Institute of Health and in collaboration with the Ministry of Education, on the health, development and mental well-being of minors. “The first results are alarming,” he said. We’re talking about eating disorders, suicidal ideation (suicide attempt and suicide), self-harm, sleep-wake rhythm disturbances, and social withdrawal. The increase in requests for help for the use of psychoactive substances, cannabinoids and alcohol has also been a matter of concern, while unaccompanied migrant children have expressed difficulties in managing solitary confinement and quarantine in reception centers. ” .

Some stories made in the press at the beginning of the pandemic period, which told teenagers that “they didn’t care about grandparents,” Dr. Matteo Lancini for writing a letter to teenagers in which he invited adults to reflect on their responsibilities. The Authority for Children and Adolescents invited him this morning to speak before Parliament and reported: “At that time a rhetoric of young people’s guilt did not seem appropriate.”

In conclusion, Lorenzo, a young man from the Children’s Council established in 2018 by the AGIA, spoke. He spoke about the workings of the Council and his personal experience. In fact, there are about twenty young people who meet monthly and reflect on various topics. Its task also becomes very important for the Guarantor Authority in its activity.
The report is available at the following link 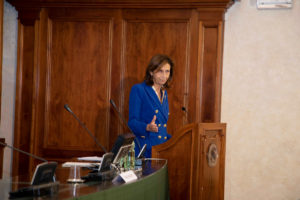